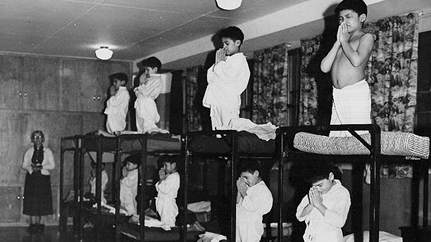 “The opposite of love is not hate, but indifference.”
Clearly the Idle No More movement is a very multifaceted situation that is spawning many heated and often dogmatic opinions. True to the cess pool that politics can be, some folks hang on to these opinions like it was their life line. The more this polarised debate drags on, the less middle ground is perceived while conflict deepens with resolution nowhere in sight. This is a glaring contradiction to the snapshot of the benevolent Canadian mosaic we present to the world.
There can be no denying that historically First Nations people in Canada (FN) have been systematically subjugated and exploited, not unlike other countries in the world, South Africa for example; think about this. Consequently FN people are marginalised socially, politically and economically in a vicious cycle of poverty, lack of education and self esteem that will only deteriorate without serious progressive and compassionate action from all parties.
Notwithstanding the original contractual agreements between our governments and FN, the reality is that those agreements for a variety of reasons are not working; full stop.  As much as we might like to sweep this under the proverbial carpet it is not going to disappear. This would be the elephant in the room that will only be talked about begrudgingly and with a lot of finger pointing that merely serves to escalate and polarise this deplorable situation. Moving toward legitimate changes isn’t about digressing into blame and who started it, but about creating effective and karmically correct solutions. Giving up is not an option.
No doubt there has been financial mismanagement in FN accounting (or lack thereof) and although this needs to be owned up to sooner than later; this is not the salient issueand those who would like to make it that, are an intrinsic and systemic part of the problem. Corruption comes in all colours and political stripes when desperation meets opportunity.
Waiting for the media heat to die down (damage control) is the typical response for the incumbent politicians dealing with these thorny issues, and so hollow promises and band aid measures are once again the order of the day while this profound social injustice festers on. The world is watching us. How we choose to resolve this or not, will become part of how we are perceived and defined as a nation, and subsequently who we become. We can do better than this.
Copyright © Henri Ferguson 2013 All Rights Reserved.
Author Notes
I have been wrestling with this commentary for weeks and feeling conflicted about being an armchair critic. However on deeper reflection it occurs to me that the flip side of that is when enough of us fail to act by not having a voice we are part of the problem. I envision a Canada that can be a cohesive and fair society that is not complacent about significant social issues but has the courage and conviction to right its wrongs.  I am standing up, voicing my opinion and being idle no more.
By Henri Ferguson|2013-01-17T11:18:00-07:00January 17th, 2013|0 Comments